Joined Oct 31, 2018
·
784 Posts
What's in a name?
Frenchman Hills was just a place on the map close by where we used to Trap Coyotes, Beaver, Badger and Muskrats near "The Potholes, Seep Lakes" where we also Hunted Ducks and Geese at the same time, Back in the 1960's and 70's.

One former Trapper and possibly the earliest white resident of the Royal Slope, lived at "The Low Gap" (below todays Wanapum Dam) during the decades of the 1860's and 1870's, and is known as "The Frenchman" or just "Frenchman."
He became the semi-legendary figure for whom Frenchman Hills is most likely named.

Nobody knew his real name. He had been a Trapper and
Mountain man in the early days ... he chose to stick with as much of
the old free life as he could by catching Wild Horses in the remote and
lonely Columbia Basin.
His cabin and corrals stood on the ridge later named after him. His foreman was an Orphan Boy. When the Frenchman found him and raised him as a Horse Catcher.
The 1872-73 Winter hit the Columbia Basin early and hard. The Frenchman was preparing
the Herd from the Season's Roundup to take to the Dalles for sale, when
he became ill.
He told the foreman and crew to take the herd to market. The foreman objected, but the old man insisted.
Obedient to his orders they fought their way down the Columbia and fording it twice, eventually bringing the herd to The Dalles.

Once the horses were sold, the crew became surly and insisted that the old man was dead--that they should keep the money and abandon him.
Loyal to his trust, the foreman stood his ground alone, and guns were drawn. With two of the rebellious crew falling to the foreman's six shooter, the others [ran] to their horses and fled!

Upon his return with food, medicine, and the money, the foreman found the old Frenchman dead with a scrawled note near his hand.
"Knew you'd be back--bury me here, and keep it all!"

An Old, left behind "Barbed Wire Corral" can still be seen on (Google Earth) in a naturally formed outcropping, just North of Lenice Lake on Lower Crab Creek . Along with the many old "Rock Walls" you will stumble across out Hunting, that were built and used to help round up the Wild Horses of the past.
" TRAPPER "

Land of the Mountain Men 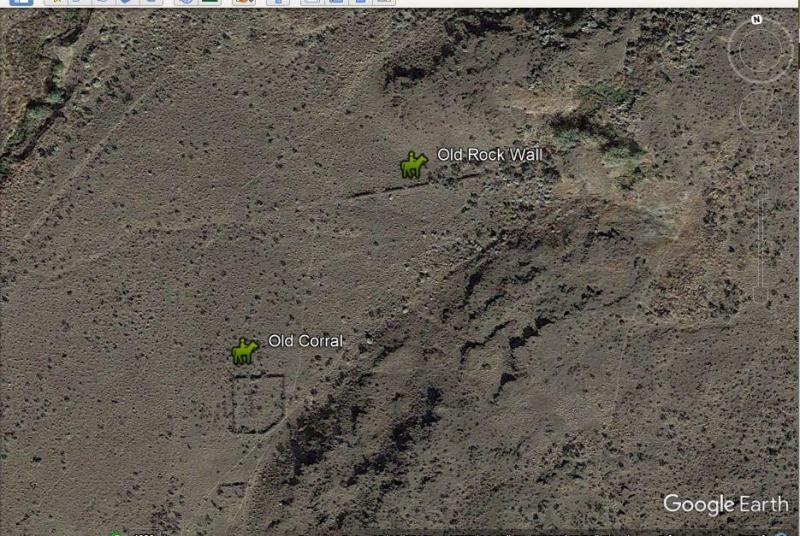 Remnants from the Day's of Yore

So, how about the Horse Haven Hills ?

I figured out the back story for the Rattlesnake Hills! But it took m a while ...